The following hominin historical timelines help place bigfoot into evolutionary context through the trait of its nondivergent big toe, and, potentially, an entire suite of traits shared with Homo as well. I’ve excerpted several paragraphs of analysis from Bigfoot in Evolutionary Perspective to put the timelines in greater context, though much greater analysis is provided in the book. Because bipedality was already established in prior data sets, bigfoot must be placed in the hominin lineage where this trait developed in a common ancestor.

Hominin historical timeline: Bigfoot ancestry: two possibilities, Australopithecine ancestry vs. Homo ancestry (Chart is simplified and does not show all hominin species and the time overlap between species.): 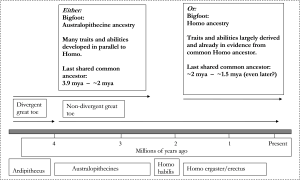 “…an entire suite of characteristics that arose and was strictly endemic to the Homo lineage is exhibited by bigfoot. While not all of these traits, like large prominent brow ridges are exhibited by Homo sapiens per se, traits like these were evident in Homo ancestral forms such as ergaster/erectus and heidelbergensis and close evolutionary cousins like the Neanderthals. Traits evident in bigfoot that are likely inherited from a Homo ancestor that would have lived approximately 1.5 – 2 million years ago and which were not exhibited by any species of australopithecine include the following:

Attributing an increased brain size to bigfoot is no doubt controversial at this point, but the physical size of the hominin dictates it. Larger animals require larger brains for the motor control associated with bigger bodies. For this reason alone, the cranial capacity of bigfoot likely exceeds the 400– 500cc range typical of the much shorter (3’6” – 5’), much lighter australopithecines (females under 100 lbs., males not much over 100 lbs.).” (p. 177-78)

Note: I am giving two evolutionary scenarios for bigfoot in Chart 8. 3. While Homo ancestry is more likely based on the suite of traits given above (and other factors discussed in the book), it is possible that these traits developed convergently in bigfoot and the last shared common ancestor of bigfoot and Homo sapiens is an australopithecine.