Bigfoot in Evolutionary Perspective: The Hidden Life of a North American Hominin 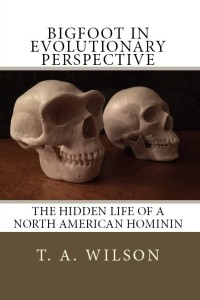 Chapter 1: Bigfoot: The Lack of a Long Call

–Contests the hypothesis proposed by some researchers that bigfoot and the orangutan share similarities of behavior and mating strategies based on perceived solitariness. Ironically, the orangutan behavorial model is important in establishing what bigfoot is not doing: the male does not call out to attract female mates or to demarcate its home range as a territorial warning to rival males. Proposes that another behavioral model should be attributed to bigfoot instead: a hominin model.

–Examines the nature and character of John Green’s database of eyewitness bigfoot sightings, almost 4,000 in number. If Green’s track find data is consistent with a living animal, according to Dr. W. Henner Fahrenbach’s peer reviewed article, it is paradoxical that other quantitative, even qualitative data in the database lacks merit. To scrutinize the reliability of such data, revisiting the psychological literature for a closer scrutiny of eyewitness testimony is a necessity.

–While the psychological literature is impressive in its sheer volume, eyewitness lab studies, which take place in structured artificial environments, are often contradictory. Some lab studies find eyewitnesses unreliable, others credible. Critics of the bigfoot phenomenon rely only on select lab studies (if they are even familiar with the literature at all) when pronouncing all bigfoot eyewitnesses unreliable as a result. What is not generally known to the public is how much criticism, including experimenter bias, lab studies have been met with by other experts.  As just one example of this criticism, Wells (1978) states “that in general low accuracy rates may be preferred among researchers. Specifically, researchers may perceive it as infinitely more interesting, more publishable, and more socially important to show low eyewitness accuracy in eyewitness research than show high accuracy.”

–Constructs a bigfoot anatomical profile through statistical analysis of John Green’s database (sasquatchdatabase.com) in conjunction with or supplemented by other evidence, like track finds and hominin fossil evidence in the case of bipedalism for example. See Anatomical Profile and Traits.

Chapter 6: Bigfoot and Gigantopithecus: Near Opposites.

–Compares the bipedal bigfoot with the quadrupedal Gigantopithecus and finds few similarities, and no grounds for Gigantopithecus to be the evolutionary forebear of bigfoot, despite this being the consensus scenario among almost all academics inclined to study bigfoot. Size alone is an extremely poor correlate when trying to determine taxonomic relationships.

See the dropdown menu to read Chapter 6 in its entirety or click the link.

–Examines the implications of the small anatomical detail of the non-divergent big toe, readily apparent on any bigfoot track cast, which are twofold: the non-divergent big toe not only helps determine taxonomic or phylogenetic relationships on the hominin timeline, where bigfoot must be placed, but determines breeding structure as well. The remainder of the chapter delves into why bigfoot must be governed by a pair mating and bonding structure.

–If bigfoot is part of the hominin family tree, then it must have shared ancestry with Homo sapiens. This chapter examines whether that shared ancestry is more likely traced to a more distant australopithecine ancestor or a Homo ancestor that lived approximately 2 mya – 1.5 mya.

–Different cranial capacity estimates are given for bigfoot by estimator–Krantz, Fahrenbach, Wilson–and model–ape, primate, and hominin–respectively. See Cranial Capacity by Estimator. The mental toolkits of the great apes–impressive in their own right–are defined and establish a minimal mental threshold that bigfoot almost certainly exceeds. Eyewitness testimony is examined for potential clues that may hint whether bigfoot is capable of proto-gestures, even protolanguage.

–Refutes the consensus among bigfoot academics that bigfoot has a non-opposed thumb incapable of pad to pad contact with its other four fingers. Academics have relied on the corrupt data sets (hand casts) provided by serial hoaxers Ivan Marx and Paul Freeman. Other evidence, including evolutionary evidence and the traced handprint find of Professor Chuck Edmonds and eyewitness testimony, indicates bigfoot has an opposed thumb. Sketch of bigfoot hand anatomy with opposed thumb provided by author in book.

–Although the egotism of scientists has played a role, ecology must be the overriding factor that explains why bigfoot has eluded science. An Eltoninan pyramid, bigfoot size, and predominant bigfoot carnivory help illustrate this. While it may seem counterintuitive, it is the sheer size of bigfoot and resulting low population numbers that have helped the species elude science. See Comparative Animal Population Chart. The book also examines other factors like active evasiveness and characteristics of bigfoot hair that act as a natural camouflage in the woods that make sightings difficult.

Chapter 13: The Hoaxer, Patterson, Observational Science, and the Needle

–Examines the role hoaxers have played in the bigfoot phenomenon and how they have led even the most credible researchers astray. The hoaxer is a man of pathology without an elevated awareness of anatomy, biology, ecology, or hominin evolution, and is defined by multiple repeated bigfoot encounters. The chapter introduces a heretofore unacknowledged hoaxer and the disproportionate influence he has had among almost all bigfoot researchers, which has led them to conclude that bigfoot is far more apelike than it truly is. Patterson is examined and fails to conform to the hoaxer’s pattern of repeat bigfoot encounters.

The bigfoot phenomenon is rooted in observational science, just like the observational science of Goodall, Fossey, Galdikas, or Lorenz. If bigfoot was a trick of mind or fabrication then contradictions should abound and classification no more possible than classifying a dragon or centaur in the phylogenetic or evolutionary tree. Yet the species is imminently classifiable within the hominin lineage and an overall consistency prevails in eyewitness observations.