The following tables illustrating bigfoot diet were complied from data from sasquatchdatabase.com. I’ve excerpted several paragraphs of analysis from Bigfoot in Evolutionary Perspective to put the data in greater context.

Table 4. 23 Bigfoot Diet, or Category of Food Eaten, According to Eyewitness Testimony (number of observations): 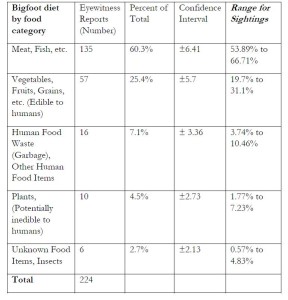 “In stark contrast to the gorilla or the primarily fruit eating chimpanzee, the bigfoot diet is strongly characterized by meat eating according to eyewitness testimony, accounting for approximately 60% of all observations (Tables 22 and 23). Such a diet would be uncharacteristic of not only the great apes, but also the primarily herbivorous australopithecines, which were either specialist heavy chewers like the robusts, or characterized by fruit eating (and softer plant foods) like Lucy’s species, Australopithecus afarensis. In extreme juxtaposition to the number of observations pertaining to meat eating in the bigfoot diet, stand the relative lack of observations pertaining to the eating of tough fibrous plant matter that requires both heavy chewing and heavy digestion. Only 4.5% of reports mention the eating of leaves or other rough foliage. In fact, 95% of all foodstuffs eyewitnesses testify to bigfoot eating could be readily eaten by modern Homo sapiens, characterized as we are by small jaws and teeth and an equally small digestive system, especially in relation to our australopithecine ancestors.” (p. 106)

“The small number of reports of bigfoot foliage eating suggests that this may be little more than a supplementary feeding behavior, engaged in to round out a diet that may occasionally be deficient in vitamins, minerals, or roughage. Not all leaves, for example, are inedible to humans if eaten in moderation. Young willow leaves fall under this category and are rich in vitamin C. Pine needles, while unappetizing, can be eaten and are likewise a rich source of vitamin C. Plants also have medicinal qualities and animals may engage in eating them from time to time for these benefits alone. Water can also be retained on or in foliage [and obtaining water, not the plant matter itself, may be the animal’s objective]. (p.107)

“Eyewitness testimony of the bigfoot diet in conjunction with the lack of protruding abdomen provides strong evidence that bigfoot is an omnivore with a definite predisposition toward carnivory and predation. All indications are that bigfoot relies on meat eating in particular to fuel a large body size and active lifestyle. This suggests it shares the reduced digestive system that characterizes all hominins in the Homo lineage; whether it is a potential member of the Homo lineage is another matter that will be analyzed in Chapter 8. But the reduction in the digestive system provides a clear indication that this is a means by which it saves on calorie intake needs and expenditure. Large guts burn a lot of energy, which requires additional calories to allow for proper functioning. The shrinkage of the gut was one means by which species in the Homo lineage saved on caloric expenditure and requirements; calories consumed by meat eating in particular could be used to fuel an expanding brain instead. The brain is the most energy hungry organ in the human body, requiring some 25% of the body’s energy needs. The lack of a large abdomen in bigfoot may be one means by which a caloric economy is promoted that allows it to fuel a larger body size and active lifestyle. Bigfoot, like all animals, hominins in particular, must be making trade-offs. A hominin with a brain the size of Homo sapiens, a gut the size of the gorilla, with the body size and active lifestyle of bigfoot is an impossibility; the calorie demands to fuel such a hominin could not be met on a daily basis.” (p. 108)