The following table compares bigfoot and Gigantopithecus. I’ve excerpted several paragraphs of analysis from Bigfoot in Evolutionary Perspective to put the data in greater context.

Read Chapter 6 in its entirety 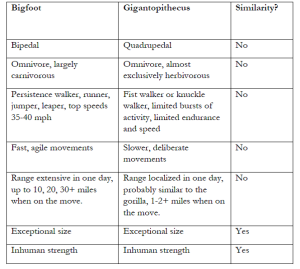 “Size alone is a poor correlate when trying to determine taxonomic relationships and because of its size Giganto has become something of a red herring in the field of bigfoot research.” (p. 152)

“Giganto was big and it was an ape, and that is where any similarities to bigfoot begin and end (see Table 6.1). While technically an omnivore, just as bigfoot is an omnivore, Giganto was primarily herbivorous while bigfoot is largely carnivorous. Giganto, while capable of intimidating displays, surely branch breaking or beating on its chest or against a tree, was for the most part very deliberate in its movements, which would have given it the appearance of an animal moving with caution. In general, such movements also characterize its closest living relative, the orangutan. Giganto wasn’t fast moving like bigfoot, wasn’t walking long distances, sometimes tens of miles each day on average in search of food and prey, and wasn’t capable of running thirty-five to forty miles per hour, and had no need to because the vegetation it ate was never far from its grasp. There were likely preferred or seasonal foods it sought out which required some trekking through the jungle, perhaps comparable to the one to two miles the gorilla sometimes treks when moving to a new food source, but once there Giganto remained for as long as the food supply lasted. The great bipedal running strides, jumps and leaps that are typical of the bigfoot were not in Giganto’s repertoire. And how could they since Giganto was a quadruped and relied on an altogether different mode of locomotion and anatomical dynamics? Whatever jumping it did would have required propelling itself from four legs. The chimpanzee is impressive in this regard, but we can’t expect the 1,200 pound Gigantopithecus with a belly full of pulpy vegetation to be anywhere near as capable. The areas Gigantopithecus could have rivaled bigfoot were in strength and size, though being a quadruped its strength would have manifested itself differently, the result of an altogether different center of gravity.” (p. 153)