The following charts of bigfoot height were complied from data from sasquatchdatabase.com. I’ve excerpted several paragraphs of analysis from Bigfoot in Evolutionary Perspective to put the data in greater context.

“In contrast to judging human heights where psychological studies consider a variance of more than two inches an error, such strict error rates would be inappropriate when judging the bigfoot eyewitness since height estimations in the case of the much taller hominin are generalizations to some degree. I don’t think any researcher expects a bigfoot reported to be seven feet to precisely measure out at such a height. What is expected is an acceptable range, and estimates within two, three, even four inches might well be considered accurate when witnesses are seeing hominins whose height falls so far outside of the human average. Therefore, acceptable actual heights of a bigfoot reported to be seven feet tall would correlate to a range of 6’ 8” to 7’ 4,” and this range might even be extended several inches more at the higher end. The argument could be made that since eyewitnesses rely almost exclusively on the larger interval of feet when giving height estimates for bigfoot that error rates should be similarly measured. Errors would then occur when a bigfoot reported to be seven feet tall is in actuality much closer to six feet or eight feet tall.” (p. 60-61) 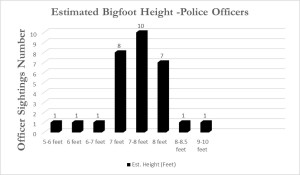 “Police officer height estimates correlate remarkably well with other eyewitness sightings estimates and are a strong indicator that eyewitnesses are not overinflating height estimates for bigfoot. The police sighting that resulted in a bigfoot height estimate of nine to ten feet was the result of the hominin being visible just above the waist as it walked through six foot tall marsh grass, so this measurement was derived by direct comparison to an object in the environment.[4] It may represent the upper height range of the bigfoot population that only a small statistical minority of adult male sasquatches ever attain. It should be noted that some other police officer height estimates were calculated by comparing the bigfoot to an object in the environment, like a tree, as were some eyewitness sightings made by the general public, lending greater credibility to the estimated height in these cases. What the police officer estimates do cast doubt upon are those eyewitness sightings where bigfoot heights are estimated as eleven feet or more. These are almost certainly height inflations or perhaps even hoaxes, though such reports are in the clear statistical minority (1.9%) anyway.” (p. 63)

“The large number of eyewitness reports (1,774) in conjunction with the testimony of trained observers (police officers) indicate that it is highly likely that adult sasquatches attain heights of seven feet or greater. A conservative conclusion that can be applied to the bigfoot population at large is that average adult heights exceed average human adult male heights by a significant margin—at least a foot or more, though it is difficult to be more exacting than this.” (p. 63-64)